a first ~ for me ~ a pinwheel quilt block

You're never too old to learn a new skill, and today I had my first lesson in piecing a pinwheel quilt block.  I've wanted to learn to quilt for the last few years and when I read about a prayer quilt opportunity through my friend Snoodles over at Lily Pad Quilting, I decided this was the time.  Though with all due respect Snoodles, it took me a LOT longer than your 'I-have-fifteen-minutes-of-time-what-can-I-get-done', but with this being my first pinwheel adventure, I expected such and set aside extra time and thoroughly enjoyed the process.   :)

Snoodles let us know about Missy who is needing help pulling together a prayer quilt for her friend, sweet Kenzie, who is 7, has cerebral palsy and is recuperating from surgery on her leg and hip.  You can read all about Kenzie at Missy's blog.  I've knitted many prayer shawls, so was immediately drawn to the idea of a 'prayer quilt' using the same principle as one prays for the quilt's recipient while the blocks are made.

Missy thought pink and white or purple and white pinwheels from a 5" square would suit.  My first pinwheel quilt block: 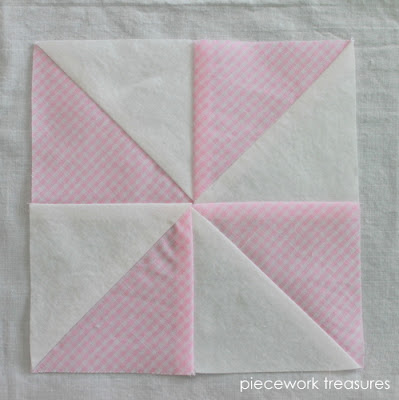 I decided to keep my first-ever-pinwheel-quilt-block and it didn't take long to work up 6 more, now that I felt like I sorta' knew what I was doing, so these have already been mailed to Missy. 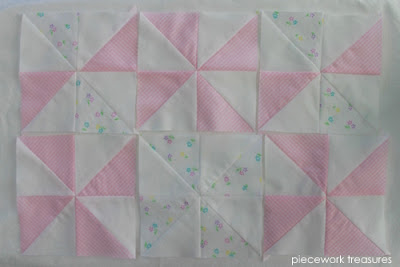 I used the Missouri Star Quilt Co. 'Update on the Easy Pinwheels' YouTube video that both Snoodles and Missy linked to and also referred to Susannah Kate over at Art Nest 's photo tutorial.

It feels nice to be part of a prayer quilt AND push myself to finally dip my toe into quilting.  I think I'm hooked!

Email ThisBlogThis!Share to TwitterShare to FacebookShare to Pinterest
Labels: QUILTING, SEWING | ALL