Towa wants to say 'hello' to you today!  She wanted to say 'hello' last Friday on Me-Made-May 2015 Animal Theme Day, but my husband and I were in such a rush to leave on our trip to check on Tom's mother, that there wasn't enough time to include Towa in that day's photograph.  Her feelings have been hurt so today time was set aside for little Towa.

Soooo, we had an indoor photo shoot.... 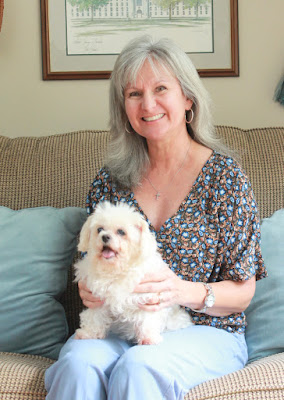 .... and even stepped outside for a few shots.  We decided the lighting was better inside.   This light just sort of washes out all that pretty Maltese fur. 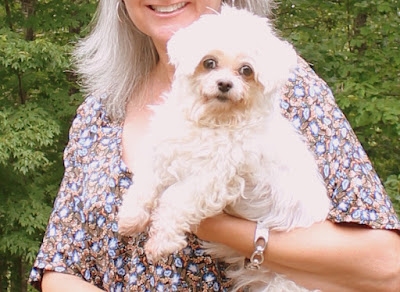 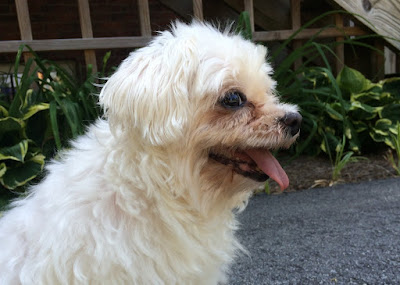 She's best at the 'I'm so cute' look.  Yep, methinks she nailed that one.  She is a social butterfly, and if you were to stop by, she'd be your new best friend! 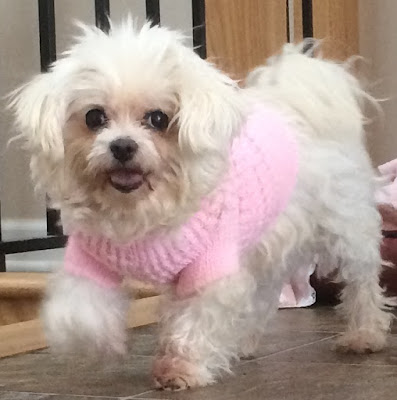 She was my 'model' for LilyPad Quilting's Pets on Quilts Show 2014.  She was not feeling particularly 'in the modeling mood' this day..... but our entry did win a nice prize.

Maybe she just liked my Road to Oklahoma Quilt better! 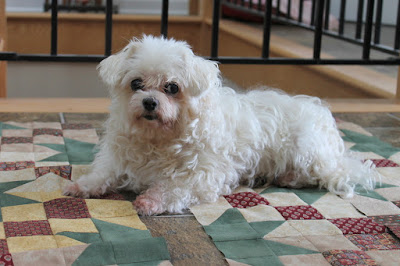 A grainy old photograph from May 2006 when I brought her home for Melissa, my youngest daughter.  Towa adored my 50 pound dog Sandy and Sandy was always so careful around little Towa.  In this photo below, we had tied a little ribbon with a bell on it so we would know when she was underfoot.  She barely fit in the palm of your hand at 6 weeks old.  I'm not sure she even weighed 1 pound.  So tiny. 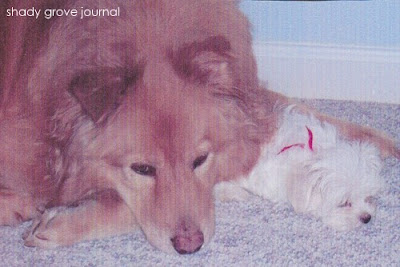 When I married Tom in 2007 that added Sadie Belle, a beagle, to the mix.  All three dogs liked for Melissa to drive them around in our utility vehicle we use on our property.  Towa's riding shotgun in the front seat with Melissa here.  Welllll, probably more like in Melissa's lap.  :) 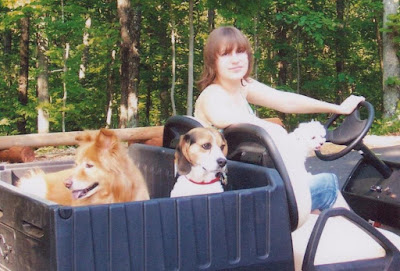 Melissa dressed her as a bumblebee one Halloween.  Sandy was glad they did not make Halloween costumes her size.  Towa has the 'I'm so embarassed.... please help me' look here. 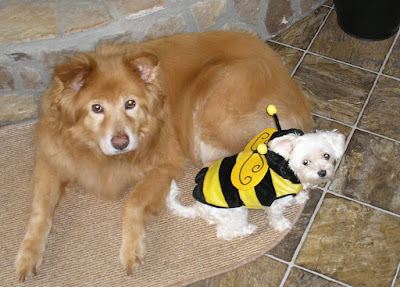 She was our hiking dog and enjoyed exploring waterfalls and trails.  Shhh.  Please don't tell Melissa I've put these photos of her taken in 2008-2009 up, as she did not particularly care about how she looked in these. 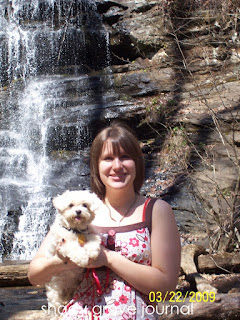 Our family Christmas card in 2010.  Can you see little Towa front and center? 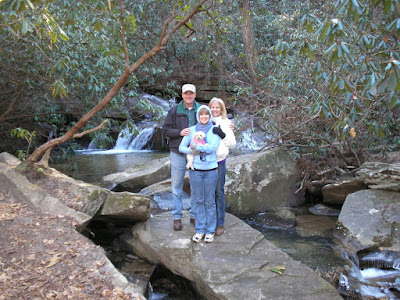 Towa's now 9+ years old and her body does not enable her to hike with us anymore.   We have to carry her up and down stairs too now.  Sadie Belle, the beagle, died in 2011 and my sweet Sandy died 2 years ago this month.  I still miss sweet Sandy so..... but little Towa doesn't seem to mind all the extra love showered on her as our only pup now. 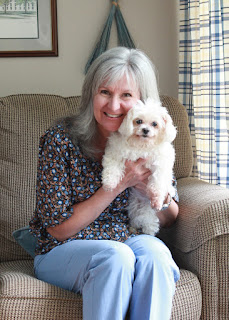